Home > At a Glance > Activities and Markets
See sub navigation

The global offshore market has recovered over the recent past. The number of new greenfield projects reaching final investment decision (FID) is returning to pre-downturn levels. Since 2016, the number of offshore project commitments has more than doubled, with deep water playing an important role. The energy transition is a reality, leading our clients to focus on a more balanced portfolio between oil, gas and renewable energy sources. 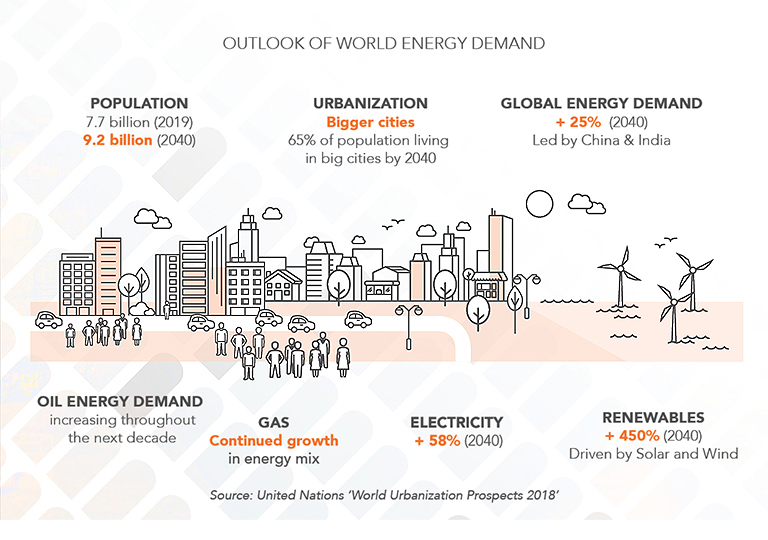 By 2040, the world population will surpass 9 billion people. Taking into account increasing urbanization, with 65% of the total population living in big cities close to the oceans, the global energy demand is set to grow by more than 25% in the coming decades. Consensus among many market analysts is that, while the demand for oil and natural gas will continue to dominate the primary energy mix, renewable energy is gaining a significant position. The demand for oil is also expected to continue to grow throughout the next decade − albeit at a slower pace − and the energy mix will become more balanced. Moreover, oil field depletion plays an important role for new greenfield projects to be sanctioned. Supply gaps are probable and offshore deep water oil production will continue to play a role in the years to come. Furthermore, the shift to alternative energy sources provides SBM Offshore with new market opportunities going forward. The Company is continually reviewing its strategy based on macro trends and believes that it is adapting effectively to the energy transition.

Despite the current upturn, the Company remains vigilant and maintains a disciplined approach to market opportunities, particularly as oil prices can be volatile. Geopolitical events such as tensions in the Middle East, the deteriorating situation in Venezuela, the new coronavirus outbreak, the impact of renewed USA sanctions and the trade issues between China and the USA cause the oil market to be inherently volatile.

SBM Offshore has a solid foundation to cope with such market volatility due to its long-term Lease and Operate contracts. Moreover, to deal with this volatility, which may affect clients’ investment decisions, the Company continues to focus on an efficient cost-base, shorter cycle times and standardized ways of working. In line with this, SBM Offshore has matured its Fast4Ward® concept into a principle-based program to be applied across its product portfolio, which will facilitate the philosophy ’Better Performance, Delivered Faster’. Fast4Ward is part of the Company’s effort to fast-track projects, reduce risks and provide reliable execution plans, making projects even more competitive.

It is expected that, going forward, a combination of a robust technology portfolio, project management, engineering capabilities, operations expertise and financing capabilities will be needed to deliver sizeable deep water projects across the energy mix. Success will depend not only on internal capabilities and discipline, but also on the right partnering strategy to add value to current business and enhance learning for new business. Focus on the full lifecycle value is becoming increasingly important for the Company's clients.

SBM Offshore’s product portfolio focuses on floating production solutions in oil, gas and renewables. The Company continues to be active in the following market segments: FPSOs, Floating Production Units (FPUs), TMS and Terminals. The Company also has a strong focus on the operation of its fleet. In preparation for the energy transition, SBM Offshore is developing its Renewables and Floating Gas solutions.

Following a period of under-investment in oil and gas production infrastructure, the Company believes that fast action is required from its clients to secure future supply for the growing demand. As forecasted in the previous year, nine FPSO contracts were awarded in 2019, with two to SBM Offshore. The Company evaluates each opportunity for relative risk and reward, building on its strengths and engaging early with key clients. This allows a disciplined approach to the Company's tendering activities.

In 2019 progress was made on multiple FPSO projects and a complex TMS. In addition, on-going Front-End Engineering and Design (FEED) activity demonstrates that the Company can leverage its experience – particularly in the critical preparatory stage – to help move clients’ projects onto the next stage.

During the year, SBM Offshore completed its first standardized hull, which is allocated to FPSO Liza Unity and made progress constructing its second and third one, all based on Fast4Ward; the latter two are allocated to FPSO Prosperity and FPSO Sepetiba projects. In addition, the Company placed orders for a fourth and fifth standardized hull. This decision to start construction in anticipation of future orders is unique in the industry and reflects Management's confidence in the market upturn and the increased interest from customers in Fast4Ward.

Major achievements throughout the year include:

Looking ahead, up to 35 FPSO projects could reach FID between 2020 and 2022 in the high case scenario. Market estimates remain unchanged from one year ago.

The benefits of the Company’s investments during the down-turn, developing its transformation programs (Fast4Ward, Digital and Sustainability) are now yielding results, positioning SBM Offshore for growth. The Company continues to adapt to the fast-moving market, as well as directing efforts towards the energy transition.